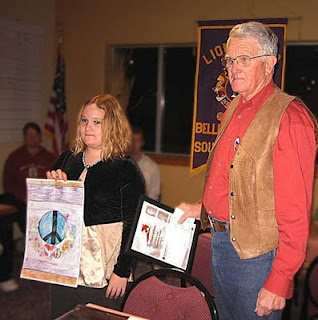 Lion President Leo Orme presented the First Place prize to Adrian Erb of the Belle Fourche Middle School, shown here on the left with Lion President Leo. In addition to her certificate, Adrian’s fine work was rewarded with a $50 prize awarded by the club. As with most of the photos in this website, you can click on the image to see a larger version, or you may wish to visit our Photo Gallery for a collection of all recent photographs. 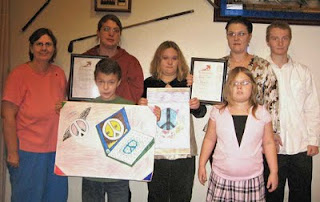 Shown here are the winners of the Peace Poster Contest and some of their family members.
At extreme left is Kathy Messner of the Belle Fourche Middle School, adviser to the winning artists – First Place winner Adrian Erb (third from the left) and Second Place winner Tristan Barden (front row left). You may click on the photograph to see a larger image. Mrs. Messner, the winners, and their families were all dinner guests of the Belle Fourche Lions Club.

Some 22 Belle Fourche ladies have launched one of three new Lions Clubs in the Black Hills. Their application to charter the Northern Lights Lions Club was submitted November 7th, following an initial meeting on Tuesday, November 3rd at the Country Club.

Other officers will be selected at their next meeting, which is slated for 7:00 p.m., Tuesday, November 17th at the AmericInn. Members will also determine club dues and future meeting locations.