Lion Harry Haivala takes his Lions work on the road

When long-time Lion Harry Haivala took on the duties of chairing the Eyeglass Drop-Box Committee two years ago, he didn't waste any time.  Despite escaping the frigid climes of South Dakota for a few months of warmth in Arizona, he took his work with him!

Harry and his wife, Irene, have been going south for 18 winters.  But when he took on the task of coordinating the collecting of used eyeglasses for the Belle Fourche Lions Club, he decided to "expand" the collection area.

While at his park model home in north Mesa, Arizona, he decided to set up a "South Dakota" collection point for used eyeglasses in the office of their park, Apache Wells RV Resort.

"I knew that in a 55+ resort, there would be quite a few new glasses, and no place to go with the old ones, except Walmart."  Last season, he collected about 30 pairs of glasses.

A retired Game Warden with the South Dakota Game, Fish & Parks department, Harry Haivala was based in Belle Fourche for 27 years.  During those years, he appeared as a guest speaker at Belle Fourche Lions.

"I decided after I retired to join one civic organization and determined that Lions was the best," Haivala said.  Since 1994, Lion Haivala has been an active member of the Belle Fourche Lions Club. He is also chairman of the Christmas Family Committee and continues to provide leadership for the Adopt-A-Highway Clean-Up.  Thanks for your good work, Lion Harry Haivala! 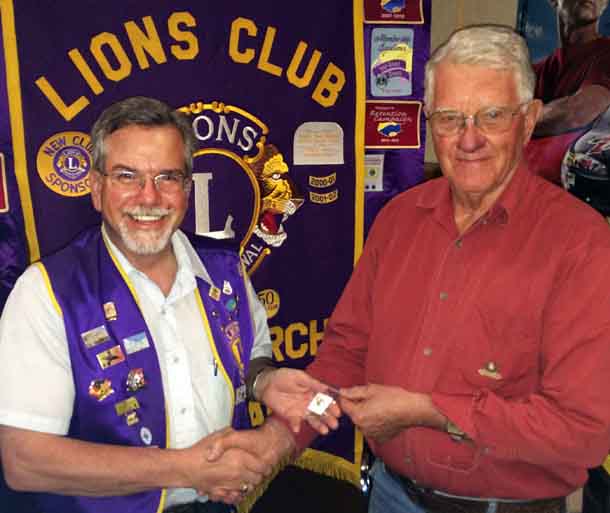 Lion Del Neumeister (left), Belle Fourche Lions Club Secretary, received a Membership Pin for "successfully opening the door of Lionism to at least two individuals."  The pin was presented during the May 24, 2016 meeting of the club at The Stadium by president Leo Orme.  Congratulations and "Well Done, Lion Neumeister!"

Following an April meeting of the Lions Club, we discovered a bit of pencil-on-paper artwork (shown above at left)  lying on one of the tables at The Stadium.  We were intrigued by it and added a bit of "Lions colors" to it, as shown at right.  We suspect that most Lions already know that the talented artist is Frank Walton.