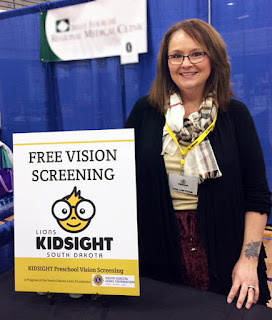 It was a busy and productive day on Saturday, January 14th at the Belle Fourche Area Community Center "Health Fair."

Pictured at left is Pinky Horner of Rapid City, appointed by the South Dakota Lions Foundation to serve as Vision Coordinator for District 5SW.

Lion president Joyce will likely have a more complete report on the screening at our next meeting scheduled for Tuesday, January 24th at Grap's Burgers & Brews.

Here are a couple of items for your calendar (just in case you don't routinely check the "Lions Calendar of Events" on this site.  There are two major Lions gatherings scheduled early this year:

While it's too late for early registration, you could still make it to the Lions State Convention coming up January 27-28 in Fort Pierre.

This spring, Multiple District 5 (MD5) will be celebrating "100 Years of Lionism" during its convention May 17-20 at The Lodge at Deadwood.  There's still time to get registered early for this event, being held right in our own back yard!  MD5 Convention Registration Form

Members asked to rededicate themselves to Lions goals!