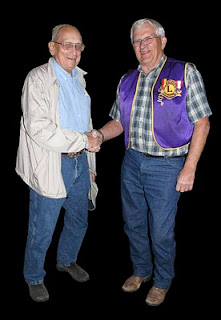 During the October 14th meeting of the Belle Fourche Lions Club, two members were recognized for recent honors bestowed upon them.

Lion Kunerth was among a group of World War Two veterans selected to be flown back to Washington, D.C. in late September (2010). Lion Al Shaw (not shown here) was also on the trip. They enjoyed a remarkable reception in Rapid City and made the trek to D.C. via the "Honor Flight" program. The group was able to visit the World War Two Memorial, as well as several other memorials. Kunerth said he was most impressed with the Korean War Memorial.

Thanks to Lion Kunerth, we're able to include a few photos from this event in our Lion's Photo Gallery.

Lion Rich Drabek was recently tapped to receive the International President's Leadership Award. It's the latest in a long line of honors and awards earned by Lion Drabek. Congratulations to both these Lions for jobs well done!

Lion President Ron Ensz shared a letter from Lion Wanda McCormick of Rapid City, District Leader Dog Chairperson for 2010-2011, which outlined the Leader Dog School program begun in 1939. Its facility near Rochester, Michigan, allows any blind person who wants to increase his or her mobility and freedom an opportunity to apply to the school and be awarded a dog guide. Through the generosity of Lions and others, there is no cost for the blind person to attend the school and obtain a Leader Dog. The cost for the training of one guide dog is $38,000. The current "Wild for Lions" campaign will allow Lions to reach more of the 10 million people in the United States who are visually impaired and in need of assistance. Lion McCormick has set a district goal of 100% participation in Leader Dog. Our Belle Fourche Club voted to send $50 to support the initiative.