Let there be light!

Before he graduated from Belle Fourche High School in May, Jake Ryan approached the Belle Fourche Lions Club with an idea for his Eagle Scout project.

He had already talked with the Belle Fourche Director of Public Works about his idea of putting lights in two of the shelters at Herrmann Park.  Although there is electricity in the shelters, there were no lights.

“My mom works with Cub Scouts, and they had an event in the park that ran in to the evening hours – and it got too dark for them to finish their event,” said Ryan.

“That’s when I came up with the idea of putting lights into the shelters for my Eagle project.”

With approval from the city to move forward, young Ryan attended an April meeting of the Lions Club seeking financial support for his project. The Lions Club unanimously approved $350, and Ryan forged ahead – buying a set of 180-Degree two-headed LED lights for the shelters.  Each light cost almost $100.   He also purchased conduit, wire, boxes, and related hardware necessary to complete the installations. 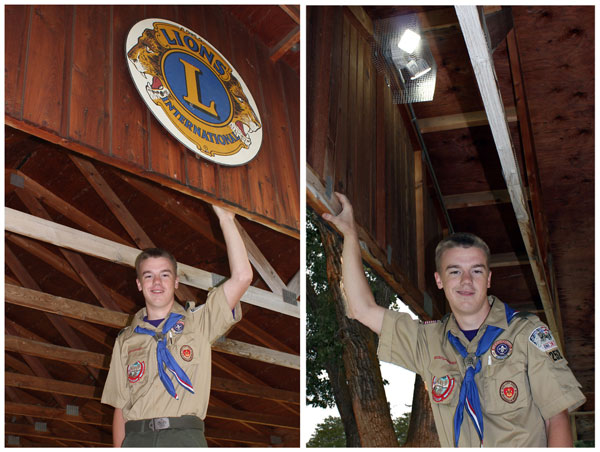 The 18-year-old Ryan, son of Jim and Kelli Ryan of Belle Fourche, then went to work at the shelter and completed the project in May.  His work was then checked by a certified electrician, who gave his work a thumbs up.  The lights are activated by motion detectors, and they provide park patrons with much-needed light – and a higher degree of safety!

Although he’s no longer a Boy Scout, young Ryan is “still involved” with Troop 19, whose Scoutmaster is his dad, Jim Ryan.  He’s working full time this summer in Belle Fourche, but will enroll this fall at Montana State University in Bozeman, where he will major in architecture.