Lion Harry Haivala reflects on 30 years as a Game Warden 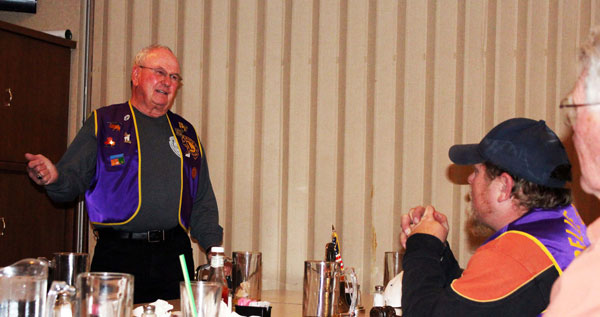 Winter arrived for sure this week -- a bit of snow accompanied by some cold temperatures was a bold reminder that winter is just around the corner.

But the Stadium Sports Grill was warm with fellowship and humor Thursday evening (10/25/12) as the Belle Fourche Lions gathered to conduct business, partake of a meal, and enjoy a program presented by fellow Lion Harry Haivala.

A native of Harding County, Lion Haivala served as a South Dakota Game Warden for some 30 years.  Such a robust career surely has lots of memories, and Lion Harry reflected upon some of his more exciting -- and humorous -- experiences.

One of the events we found particularly intriguing took place up near O'Neil Pass.

"I could see a spotlight working up in the trees off the road, so I parked off to the side of the road and shut down my lights.  A vehicle then came out onto the road and I pulled up behind them and stopped them.  They had loaded firearms in the vehicle, which was against the law, so I wrote them a ticket.  But they also had a deer in the trunk of the car, and they claimed they'd gotten the deer the day before, and it had their tag on it."

Haivala says after writing a ticket for the firearms, he let them go, and then turned his vehicle around and started down the road, even though he said he felt something "just wasn't right."

"I had cut-off switches for my lights and tailights, and I had earlier turned them off but forgot to turn them on.  These same guys came up behind me and started flashing their lights, so I stopped and got out.  They said 'you know, you don't have any tail lights, and we're going to make a citizen's arrest.'"

"It kind of irritated me, and I said 'I want to see that deer you got again.'  Earlier that day, I had read a story in the Rapid City Journal about a young hunter who'd been camped up in that area and got his first deer.  It was hung in a tree...and somebody stole it."

The news article had gone into detail about how the deer had been hung and how the rib cage was propped open, and Haivala had remembered that.

"So I checked the deer out real close, and then let them go on down the road. I then got in touch with the Rapid City guy and his son who had shot the deer, and they described the kind of deer it was, the number of points, and the stick they had carved from a pine tree to prop the rib cage open.  So I called ahead to the police department in Lead, who stopped the guys when they arrived in town and confirmed it was the stolen deer."

The father of the boy who had shot the deer told Haivala that they wouldn't press charges if the men would bring the deer back and apologize to the boy for stealing the deer.  The men complied.  While there were no charges for the theft of the deer, the men did have to go to court on the spotlighting and firearms violation.

"They're probably decent citizens by now," said Haivala, spurring a round of laughter.

Lion Swede Wennberg has honored for his 35 years of service to Lions.  A letter from International President Wayne Madden was presented to Wennberg by club president Rik Bartels (see photo at right).

During a brief business meeting, it was determined that it may well be spring before all necessary approvals can be obtained for planned additional construction on the Johnny Spaulding Cabin.  In the meantime, the city has agreed to store the construction materials until the work can finally take place.

And members also postponed work on the Lions Building until the weekend of Friday and Saturday, November 2-3, when we hope to have better weather for replacing the roof to the structure.

Recognizing the special work performed by the Belle Fourche Volunteer Fire Department, members also voted to make a donation of $250 to the department, which has had a particularly challenging year.

Several other business items were discussed as well.  You'll see them duly noted in the latest meeting minutes (Just click on the "Minutes" tab at the top of this page).