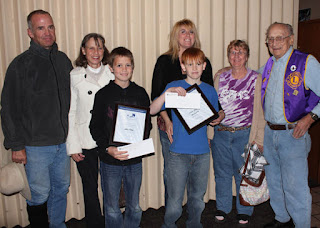 Winners of the annual Lions Peace Poster Contest were honored last night (11/8/12) during a meeting of the Belle Fourche Lions Club.

The creators of the two winning posters are in front with their certificates and cash prizes.

Standing at far right are Kristy Messner, supervisor of the contest at the Belle Fourche Middle School, and Bill Kunerth, who is chairman of the local contest.  For a closer look at the awards ceremony and the winners, visit our Lions Photo Gallery!

Each year, Lions clubs around the world proudly sponsor the Lions International Peace Poster Contest in local schools and young groups.  The contest encourages young people worldwide to express their visions of peace.  For 25 years, more than four million children from nearly 100 countries have participated in the contest.

We're proud of all the  Belle Fourche kids who participated in this contest.  And our congratulations again to John Maher and Caden Kinter!