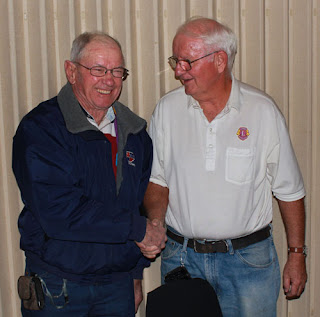 It was an evening with many awards last night (11/10/15 as the Belle Fourche Lions Club recognized several members for their recruitment efforts, longevity and perfect attendance.

And the club itself earned two significant awards, which will be displayed on the club flag.  They were the Service Challenge Award for two of the challenges and the 2014-2015 Year Round Growth Award.

Lion Rick Walton was presented the Excellence Pin for bringing in three new members.  And the two gents shown in this photo were also honored.  Lion Bob Schnaible (left) was recognized for 40 years of service, while Lion Lee Voyles (right) was honored for 35 years of service as a member of Lions. 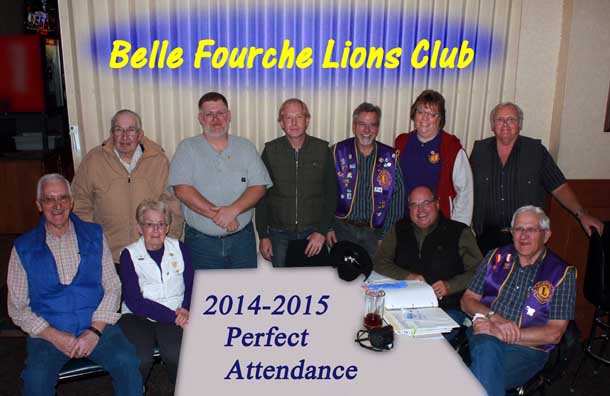 These are members who were honored for Perfect Attendance during the past year.  Shown left-to-right (seated):  Robert Drabek, Joyce Drabek, Ron Ensz and Rich Drabek; Honorees standing are: Chuck Livingston, Rick Walton, Brian Kline, Del Neumeister, Melodey Zupan, and Frank Walton. (Note:  You can get a close-up look at this photo -- and others -- in our Lions Gallery)

We were delighted to have the following guests from Newell with us: Lions Linda Vollmer, Neil Vollmer, Carol McCarthy, and Elaine Hewson.  Also, Lion Rick Walton introduced Rocky McGinnis, a potential new member.

It was announced that volunteers are still needed for the Vision Screening at South Park Elementary School this Thursday (11/12/15).  Lion Zupan reported that she's purchased of $100 in hats and gloves for the screening.

The club voted to submit an application to the Greater Belle Fourche Foundation for a grant to help build a shelter at the Recreation Center.

Lion Joyce Drabek reminded members to put January 9th on their calendars -- that's the date for the Wellness Fair at the Rec Center.

And  Lion Voyles encouraged members to pick up their raffle tickets to support the work of the South Dakota Lions Foundation.  They're $5 each, $20 for five, or $25 for ten tickets ( best deal!).

Lion Linda Vollmer from Newell presented an excellent program on diabetes.  The disease seems to be growing most rapidly among children -- but it's a disease that affects all ages.  Over 32 million people have diabetes, and it is #7 on the list of causes of death.

To learn more about Lion Vollmer's presentation -- and other meeting highlights -- we encourage you to read through the Minutes of the meeting.  They're always just a "click" away from the Minutes tab at the top of this page.

Our next Lions meeting will be Tuesday, November 24th.