Nearly two dozen Lions and their guests were on hand for the first fall meeting of the Belle Fourche Lions Club Thursday (9/14/17) at Grap's Burgers and Brews.  It was a busy time as the club honored several members and also conducted a considerable amount of business.

Leading the awards list were three Lions named recipients of the Melvin Jones Award.  They included Lions Rick Walton, Joyce Drabek, and Del Neumeister.  The award – named for the 1917 founder of Lions, International, Chicago businessman Melvin Jones – is one of the most prestigious given by Lions, which now has more than 1.5 million members in more that 200 countries. 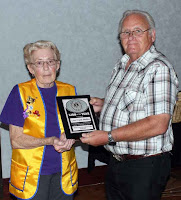 All three recipients have been active in a wide range of club programs.  Drabek and Walton are past presidents of the Belle Fourche club, and Neumeister has served as secretary for several years.  A quick perusal of the "Committees" tab at the top of this page will reveal the diversity and depth of club involvement by these three Lions.   Each received a plaque and pin, and a heartfelt round of applause for their good work.  Family members were on hand to celebrate their achievements, too. Check out our Lions Gallery for some snapshots of the event.

Acknowledging the achievements of other Lions was on the agenda as well.  Lion Frank Walton (pictured at right) was presented with the Lion of the Year award for 2016-17 by immediate past-president Joyce Drabek.

And Lions Chuck Livingston and Robert Drabek were recognized for a total of more than 100 years of service in Lions.

Elsewhere on this website, you'll see a short video profile of Lion Livingston, whose 50 years of service has been entirely with the Belle Fourche Lions Club – and marked by a perfect attendance record!

There was considerable discussion about ways the club might assist the many people adversely affected by hurricanes along the Gulf and Atlantic coasts.  The club approved donating some $500 in two separate gifts to aid in relief operations.  Also approved was $150 to each eye clinic in Belle Fourche to support their work on behalf of Lions.

There was more, of course, and we invite you to scan through the draft minutes from our September 14th meeting to learn more.  The next meeting for the Belle Fourche Lions Club is scheduled for Grap's on Thursday, September 28th at 7:00 p.m.