With less than a fortnight until Christmas, the Belle Fourche Lions Club gathered Thursday (12/14/17) for its final meeting of 2017.  About two dozens Lions and guests arrived for the dinner meeting at Grap's Burgers and Brews in Spearfish.

We were delighted to host District Governor Tim Brown for this meeting. 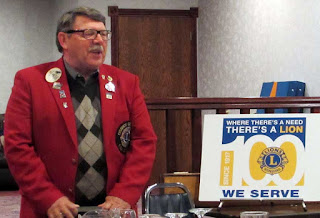 "You have a great club," Brown opined in his opening remarks, reminding members that it was 100 years ago in Chicago, Illinois that Melvin Jones pioneered Lions clubs.  Now boasting some 1.4 million members worldwide, Lions, International is pursuing a goal that would increase global membership to 1.7 million members.  Importantly, Lions is working to reach out and touch the lives of 200 million people with our many service projects.

Brown noted that International President Naresh Aggarwal has focused the theme of his term on service – We Serve.  Lion Brown talked about two powerful initiatives that are underway for Lions International:  the campaigns to battle diabetes and pediatric cancer.  Both need our attention and continuing support.

We can, he said, accomplish great things through the "Power of WE."

Clubs need to ask themselves, what are we doing?   District Governor Brown is challenging each club in the district to bring in new members and start a new "legacy" project that will serve and endure.   When informed of the Belle Fourche Lions long and continuing commitment to building park shelters in our community, he said that such a project is a perfect response to the challenge! 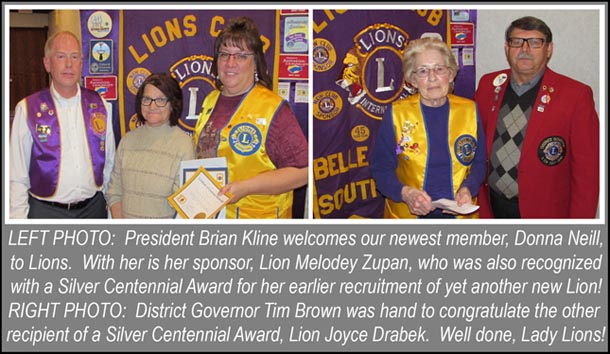 Several other Lions were recognized by DG Brown.  Among those acknowledged for membership awards were:  Lion Monty Raber, 10 years; Lion Tom Nary, 20 years; Lion Floyd Wennberg, 40 years; and a posthumous award to Lion Cal Geis, 45 years.

The vision screening at South Park Elementary and the Middle School on December 12th was apparently quite successful with approximately 300 children screened.  The final report is not yet in, but several parents are being contacted so that their children can meet with an eye doctor.

Lion Melissa Kraft reported that gift certificates have been purchased for the "Christmas Family.  Members expressed appreciation for her leadership on this project.

The 50-50 drawing was won by Lion Willert, whose two sons Logan and Blake attended the meeting as guests.  A nice touch!

Members were reminded that the Belle Fourche Health Fair will take place at the Belle Fourche Area Community Center on Saturday, January 13, 2018 from 8 a.m. to 2 p.m.  Volunteers are asked mark that date on their calendars, since Lions will be conducting community vision screening.  Members wanting to volunteer will have a final opportunity to sign up at our next meeting, which will be Thursday, January 11th at Grap's.

Thanks to Lion Secretary Del Neumeister for his timely and comprehensive draft minutes for the meeting, which provided most of the substance for this story.  For a few photos from this meeting, the vision screening on December 12th, and other Lions activities, visit our Lions Gallery!

Best wishes for a very Merry Christmas and a Happy New Year!