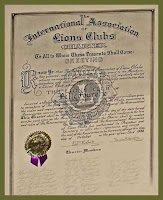 Belle Fourche Lions Club members have been recognized as leaders in public service.  The club is well known for the camaraderie of its members, and we enjoy working together for the community.

The Belle Fourche Lions Club has a long and admirable record of public service within the community.  True to a traditional goal of Lions International, we strive to provide eyeglasses for needy resident.  Our members have built numerous picnic shelters in city parks and at the Roundup grounds.  Wielding hammers and other tools, we've participated in the Habitat for Humanity home construction program.  Lions have built restrooms at Herrmann Park and helped construct the Bowman Community Center. Over the years, we've performed blood pressure and other tests from the mobile Lions health van.  Each Christmas, Lions adopts a needy family.  As part of the Adopt-a-Highway program, Belle Fourche Lions routinely pick up trash for two miles alongside Highway 34 west of Belle Fourche, and we mobilized members to refurbish the Johnny Spaulding cabin for the Tri-State Museum.  Annually, Lions organize a youth Peace Poster Contest in conjunction with local schools, and we have also provided numerous scholarships for high school students.

Over the years, Belle Fourche Lions have initiated a variety of fundraising activities that support our many public service initiatives.  We've sold burgers, brats and doughnuts at the All Car Rally; provided ushers for the annual Black Hills Roundup; sold light bulbs; sold giant coloring books during the holiday season, participated in White Cane Days, and held raffles and pancake feeds.  We'll do what it takes to preserve and expand our mission of service to the community.

We are proud of our public service accomplishments and are committed to redoubling our efforts to reflect our motto -- We Serve!