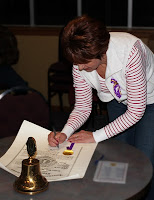 Thirteen of the charter members of the Northern Lights Lions Club of Belle Fourche were on hand last night (3/10/11) to participate in the signing of their charter, which was originally approved on November 16, 2009.

The Belle Fourche Lions Club sponsored the new group and welcomed members of the new club last night -- offering congratulations on their achievement.  It was a festive evening for members of both clubs. First to sign the document was Northern Lights president Bev Banks (at right), followed by 12 other charter members who were in attendance for this special occasion..

In part, the new charter document reads, "Know Ye that the International Association of Lions clubs has granted, and by these presents does grant to the Members whose names are hereunto affixed and to all regularly elected officers and their successors, this Charter fully consitituting them a Local Club, under the name and title of The Lions Club of Belle Fourche Northern Lights sponsored by Belle Fourche...." 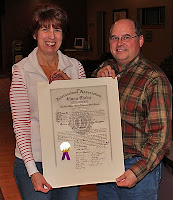 Lion Rich Drabek, who was instrumental in helping shepherd both clubs through the process of forming the new group, took a moment to acknowledge the early achievement of the fledgling club.

"The Northern Lights club has challenged themselves to take on a new project every month," noted Drabek, who led the applause for this newest club in the northern Black Hills region.

In the photograph below, members of the new club proudly gathered around their newly-signed charter.  We were delighted to be able to share this special evening with them.  Congratulations and Well Done to our "sisters" from Northern Lights! 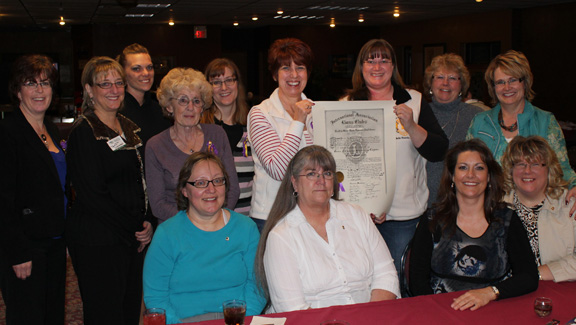