Bill Coburn has had a busy week.

The Procurement Forester for Neiman Timber Co., which runs mills in Spearfish and Hill City, South Dakota, as well as Hulett, Wyoming, made stops in both Spearfish and Belle Fourche this week to talk about the  continuing battle against the mountain pine beetle.

Coburn told his story to the Spearfish City Council on Tuesday night, outlining the rapidity with which the beetle infestations are moving northward in the Black Hills – and are now impacting Spearfish Mountain.  By the time he left the meeting, the council unanimously voted to allocate some $60,000 to help battle the tiny beetles, which have wreaked havoc across the Black Hills.  But it’ll take a lot more than that.  Coburn says the annual price tag to win the battle is in the range of $10 million.

Last night (2/23/12) Coburn spent even more time with the Belle Fourche Lions Club, providing a clear picture of just how the tiny little beetle is ravaging the Hills, and offering some ideas about what more needs to be done.  He also enlisted the help of club members in spreading the word about the importance of dealing with beetle infestations.

“This affects everyone in the Black Hills,” said Coburn, noting that the beetles not only will take their toll on tourism, but will cause havoc in many ways – from increased wildfires and public safety issues to loss wildlife habitat and reduced property values.  That, of course, will affect tax revenues.  The beetles also threaten watersheds and drinking water.

And the critters are moving northward with the south and southwest winds of summer.  Their movement is most dramatic during the period from late July to early September.

Contrary to what many people think, mountain pine beetles not only attack pine trees, but spruce as well.  It’s hard to imagine that the tiny beetle can cause so much damage.  But thousands will infest the bark of a tree and result in its demise.  The life cycle of a beetle is only one year.

Coburn provided an overview of pine beetle history in the Black Hills, which reaches back to the late 1890’s, when one-time U.S. Forest Service chief Henry Graves was working in parts of the northern Hills and detected some 3,000 acres of dying timber in the O’Neill Pass area.

A mere four years later, E.M.Griffith – who was something of an apprentice to legendary American forester Gifford Pinchot – assessed the same area and found the growing infestation had reached 116 thousand acres!

Earlier this week, the Black Hills Pioneer reported that Lawrence County has been authorized by the State of South Dakota to spend some $1.8 million in unspent Mine Severance Tax funds to fight pine beetles.  And there's been a hodge-podge of public and private funds that have been accumulated and spent on the problem.

"I think it is important that  the public understands that the State of South Dakota only authorized Lawrence County to spend the $1.8 million if they as a commission agree.  The Commissioners will be meeting on Tuesday, February 28th to decide if and how much they intend to spend," Coburn later told us.


He further noted that there has been significant amounts of money -- around $400,000 -- that has been contributed by private donors, and that Lawrence County has contributed hundreds of thousands of dollars to this fight.

But Coburn has noted that the funding to combat the mountain pine beetle will have to be stepped up and believes that it will require a substantial outlay of public funding in order to be successful.  And that will require greater public awareness and support.

With that in mind, he invited Lions members to sign up for e-mail updates and to become engaged in helping solve the problem by encouraging support from public officials and helping to create greater public awareness about the breadth and depth of the problem.

Belle Fourche Lions members were keenly interested in the presentation and lingered longer than usual to ask questions and learn more about one of the most serious plights facing not only the natural beauty of our Black Hills Region – but the very economy of our region.

Tickets for the Lions Club Pancake Breakfast were distributed to club members by committee chairman Ron Ensz.  Tickets are $5 each and the event will run from 8 a.m. to 1 p.m. on Sunday, March 25 the Moose Lodge. 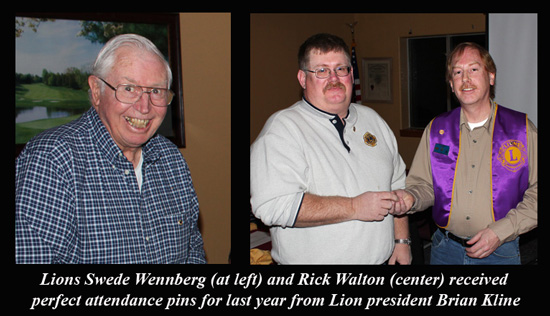