In late January, the Belle Fourche Lions Club voted to support the "Lions of South Dakota Preschool Vision Screening Initiative."  It's a project designed to focus on preschool vision screening of approximately 12,000 to 13,000 registered preschoolers across the state.  To implement the initiative, Lions of South Dakota are planning to purchase eight devices to be strategically placed in the state so that "every club will have access to screening equipment." Screenings will be provided by trained personnel.  The program was scheduled to be in place by this summer.

Another similar but separate initiative has been organized by the Rapid City-based Northern Plains Eye Foundation.  Its Executive Director, Ronda Gusinsky, came to Belle Fourche this week (3/8/12) to share information about their foundation and to seek financial support for their initiative.  She was accompanied by Dick Tupper from the Rushmore Lions Club in Rapid City.  We understand that Rushmore Lions Club, Downtown Rapid City Lions Club, and clubs in Piedmont and Hill City are supporting the NPEF project.

Gusinsky told about their CVSI Children’s Vision Screening Initiative and how it is about a year old.  Statistics:  one in 20 preschoolers and one in four school age children are affected with vision problems.  11.5% require glasses.  The identification takes into consideration that there is still the need to contact a Health Care Provider.  She spoke of new technology available and a machine called PediaVision Assessment Solution System.  She noted that they are looking for financial support. (Thanks to BF Lions Secretary Del Neumeister for his timely minutes!)

While it may be a bit confusing that similar initiatives are being launched in western South Dakota by two disparate regional organizations (NPEF and the SD Lions Foundation), it's good to know that there is not only a recognition of a need for early detection of vision disorders in children -- but plans of action for early intervention and treatment. 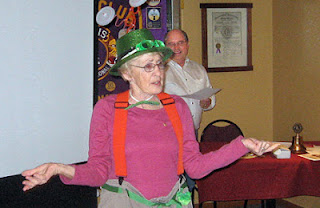 We'll keep you posted as we learn more about these initiatives.


Lion Joyce Drabek (at right) from the Northern Lights Lions Club (or was that a frisky Leprechaun?) visited the club to remind members that there will be a big Dodgeball Tournament this Saturday (March 10th) and there is still need for a few volunteers.


Members were also reminded that the annual Lions Pancake Breakfast is just around the corner (Sunday, March 25th), and there's still need for volunteers to assist with a variety of tasks.  Lions who can participate in this important event are asked to get in touch with the project chairman, Lion Ron Ensz.  The next Lions meeting will be on Thursday, March 22nd.  Thanks to Lion Bill Kunerth for capturing the above photos!