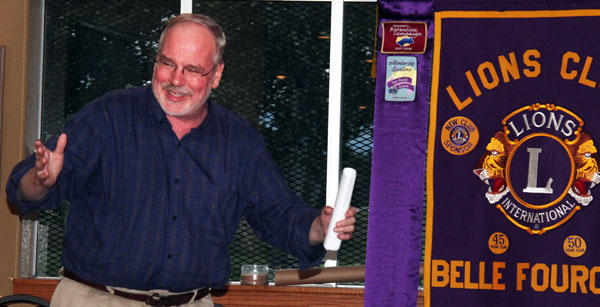 Black Hills State University David Wolff, shown above, gives an animated presentation on a topic that always seems to capture the attention of history buffs:  violence in the early days of the Black Hills region.  Wolff shared some of his research with the Belle Fourche Lions Club last night (5/24/12) at the Belle Fourche Country Club.  "Popular media portrayals claimed there were as many as two deaths a day in Deadwood during its early days.  My research indicates there was only one death about every five-and-a-half weeks."  Still, Wolff concedes that Deadwood was a fairly wild place, and statistics indicate that Deadwood was on a par with Dodge City, Kansas, as one of the most dangerous towns back in the 1870's.  Still, violence in neither of those towns compared with that western city recognized for lots of things -- but probably not "western violence":  Los Angeles?!

Wolff's talk generated lots of questions and comments, a fitting climax for a year of outstanding programs,  There was particular interest in Seth Bullock, about whom Wolff wrote a book.  Bullock was given much of the credit for establishing Belle Fourche; however, his real notoriety came in recent years with his character portrayed prominently in the HBO television series Deadwood.

During the meeting, members embraced another restoration-related project for the Johnny Spaulding cabin, but voted to defer implementation of the work until after the first of September.

Lion Rik Bartels, who served four years as club secretary, was presented with the "Lion of the Year" award from president Brian Kline.  Bartels has been a consistently involved and active Lion.  He was given a round of applause for his many contributions to the Belle Fourche Lions Club.

Now serving as vice-president, Bartels will assume the presidency of the club in the coming year.