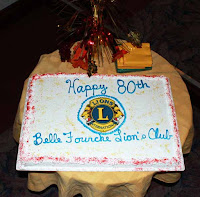 Let them eat cake!  And so we did!

The spacious meeting room behind Grap's accommodated the nice turnout of regular attendees -- and even lured a Lion or two we haven't seen for a while.  We were also graced by the presence of Lions members from the Evening Star and Downtown Rapid City Lions clubs, including Past District Governor Ken Gifford and Vice District Governor Bea Gifford.

Long-time club member Lion Chuck Livingston won the 50-50 drawing and true to form after 50 years membership in Lions -- with perfect attendance, we might add -- he donated his winnings back to the club.  Thank you, Lion Livingston!  Also recognized for their long service to Lions were members Robert Drabek (50 years) and Lion Swede Wennberg (40 years).

President Joyce Drabek then recounted highlights of the 80 years of service provided to our community by the Belle Fourche Lions Club.

Guests Cherry and Gordon Bieber gave a short program regarding their daughter, Tin Entz, who is in late stage Neurological Lyme disease.  She was bitten in 2004 and has struggled with bouts of severe and sometimes life-threatening illness ever since.  She and her family have gone through years of exasperation.  She showed symptoms of various things, and the doctors were "baffled."  Treatments were sporadic, and she has accumulated more than $200,000 in doctors' bills. Tina is now seeing a Lyme disease specialist, who himself had Lyme disease and was misdiagnosed with ALS.

The Biebers noted that Lyme disease can manifest itself in a variety of ways and can easily be misdiagnosed.  Last month, the Bieber's organized a "garage sale" benefit and raffle in an effort to help raise money for Tina's continuing treatments.  Following their presentation, the Biebers answered several questions about Lyme disease and the many frustrations surrounding its diagnosis and cost of treatment.

Dessert followed the program.  The next Lions Club meeting is set for Tuesday, October 25.

Take a tour of our Lions Gallery for an array of these and other photographs taken during our celebration of October 11th.