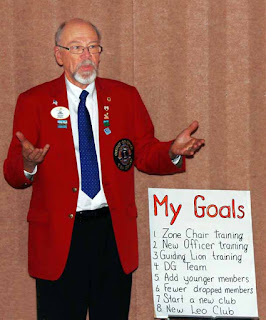 Lions 5SW District Governor Terry Peterson visited the Belle Fourche Lions Club on Tuesday, November 8, presenting several members with a variety of awards.  Among them were two Presidential Service Awards -- one going to Lion Rick Walton, and they other presented to Lion Del Neumeister.

District Governor (DG) Peterson also used the occasion to review his goals for the district as his term winds down. (Photo at left)

A member of the Rapid City Lions Club, Lion Peterson is a retired teacher, and he demonstrated his communications skills as he shared stories about his time as a classroom teacher --  and some of his experiences while visiting Lions clubs around the district during his term as District Governor.  By the time his term ends, he will have traveled over 23,000 miles!

This was a very busy meeting with lots of information and discussion -- and some action, too!  Among them was approval of a motion to change meeting days to the second Thursday and the fourth Tuesday of each month.  And there were other awards, too!  We urge you to check out details of activity from this meeting in the comprehensive minutes so diligently prepared by Lion Secretary Del Neumeister.  Just click on the "Minutes" tab at the top of this page.

You'll also find additional photos and information from the meeting in our Lions Gallery.